The Mirror been reporting on the Annexation Agreement and the Connector Road obligations for close to two years.  While we have tried to be as thorough as possible, citizens still point out that we are usually missing more than we are getting. The following letter was sent to us, bringing up several points that we have overlooked.

So in 1991, The County filed a Motion to Dismiss the Town’s Annexation Petition, the Town responded and won the Special Annexation Court’s approval of the March 1990 Agreement (the Prior Agreement) between the Town and Brown & Root, and required a few additional obligations which formed the Town Agreement and thus the County having failed, agreed to the Terms of the Annexation Agreement (the Settlement Agreement) which resulted in the Court(s) Orders November 26, 1991.  The Connector Road was in fact an exhibit presented during the Annexation proceedings and is shown to have been prepared and is dated April 30, 1991, The Martin Option and Purchase Agreement is dated May 9, 1991. in April 1991. 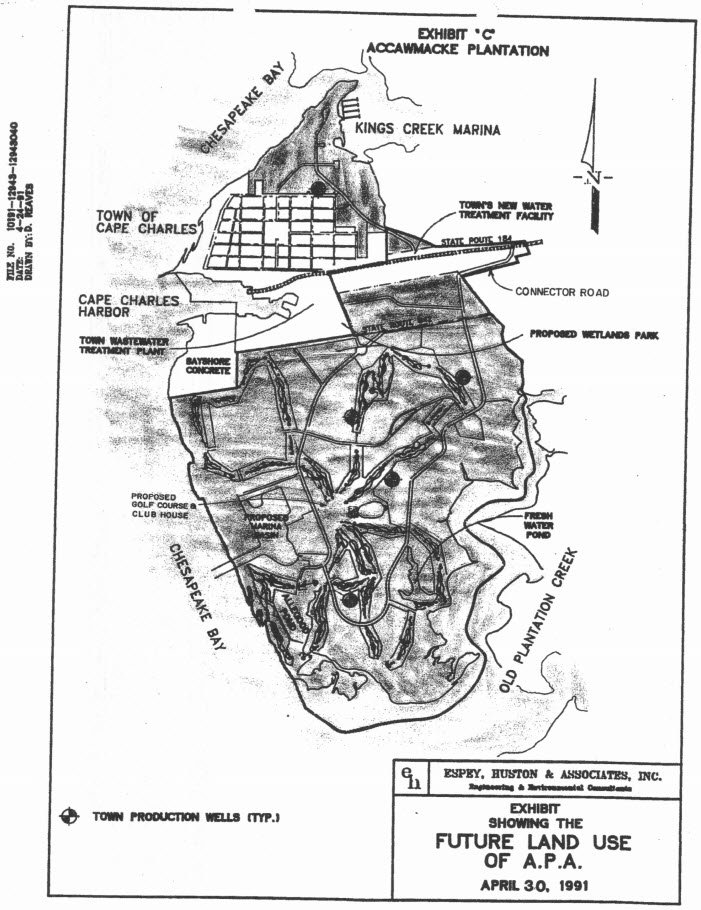 The image clearly shows that the connector road was part of the master plan, and that is was not intended to be for the harbor, but for access to Bay Creek. It also shows that it was not part of the subdivision (not a subdivision road).

Do note that the Town sought from the General Assembly an updated Town charter during the 2002 Virginia General Assembly that the Annexation Orders were to be and are updated into the Town’s Charter. Hard to argue that the Connector Road and other matters like Utilities was forgotten or ‘old stuff’. Also why would the Town in 2002 be pushing for an amendment for Eminent Domain regarding roads?

§ 2.2. Adoption of Certain Sections of Code of Virginia.

(a) In any case in which a petition for condemnation is filed by or on behalf of the town, a true copy of a resolution or ordinance duly adopted by the town council declaring the necessity for any taking or damaging of any property, within or without the town, for the public purposes of the town, shall be filed with the petition. The town may employ the procedures conferred by the foregoing laws, mutatis mutandis, and may, in addition thereto, proceed as hereinafter provided.

(b) Certificates issued pursuant to § 33.1-121 of the Code of Virginia, as amended, and acts amendatory thereof and supplemental thereto, may be issued by the town council, signed by the mayor and countersigned by the town treasurer. Such certificate certificates shall have the same effect as certificates issued by the State Highway Commissioner, under the aforesaid laws, and may be issued in any case in which the town proposes to acquire property of any kind by the exercise of its powers of eminent domain for streets, water, sewers, and related matters, whether within or without the town.

(c) In addition to the powers conferred by the aforesaid laws, such certificates may be amended or canceled by the court having jurisdiction of the proceedings, upon petition of the town, at any time after the filing thereof; provided, that the court shall have jurisdiction to make such order for the payment of costs and damages, if any, or the refund of any excessive sums theretofore paid pursuant to such certificate certificates as shall, upon due notice and hearing, appear just. The court shall have jurisdiction to require refunding bonds, for good cause shown by the town or any other person or party in interest, prior to authorizing any distribution of funds pursuant to any certificate issued or deposit made by the town.

Note: Arguments that the new road is meant for the harbor seem odd, given that Bayshore is now closing up shop. So, we essentially have a $12 million dollar road, paid for at the taxpayer’s expense that only serves the purpose of getting folks in and out of the subdivision. Current and former members of the Northampton Board of Supervisors, as well as a Bay Creek controlled Cape Charles Town Council are fully aware of the obligations.