Special to the Mirror by Joseph Corcoran 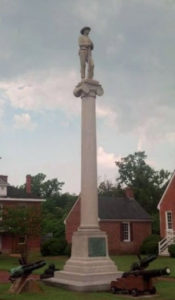 In addressing the removal of Civil War monuments , President Trump asked the question rhetorically, “Where is this going to end?”

Although President Trump says many very stupid things , I don’t think he should have been criticized for that one . I wonder about it myself .

We have a monument in Eastville commemorating the Civil War Confederate Soldiers from Northampton County who died fighting for the Confederacy . Is that monument OK or does it have to go ? One solution is to leave the monument be and change the wording on the plaque in front . I don’t mean that as a flippant remark .

The monument could be a remembrance of the most horrible time in our history without glorifying the participants on the side of the vanquished .

But there are many other monuments that will very difficult to deal with . How about the U.S. Coast Guard Cutter Taney in The Baltimore Inner Harbor . The Taney was the last ship to return from fighting the Japanese in WW2 . The ship is a monument to the brave crew but it was named for Chief Justice Roger Taney . The land-based monument to Roger Taney was just removed by order of Baltimore’s Mayor . ( Taney wrote the infamous opinion that among other things declared that freed black slaves could not be citizens of the USA .)

So you get my point . Trump’s question was not so stupid .