A barometer for the level of access developers have with the County is case of Salt Grove. Once a working waterfront on Cherrystone Creek, the property was gorgeously restored by Eyre Baldwin and Salt Grove, LLC.

The structure had been used as an event/vacation rental sometime in the past, however the 2016 zoning ordinance removed that use, which prompted the owners to submit an application for a new use as a shellfish watch house. The definition for a watch house was somewhat slippery, if it even existed at all. It was noted during a BZA hearing that there was occupancy by a caretaker, or watchman where he might sleep over on the premises—that is to be sure no one made off with all the oysters that weren’t growing in the creek. Former county zoning administrator Melissa Kellam stated that the county was careful that the structure would not be considered a residence or have a residential use. “I thought a watch house might be some place where a person watches over a property, like a caretaker, so I did keep this in mind if there are sleeping quarters, it cannot constitute a residential use,” Kellam said.

“It seems to me that it was a residence that became a watch house in order to circumvent zoning. Whether we have a real definition of a watch house, ‘that it shall not obstruct navigation nor injure the private rights of another person’, I think this comes close to injuring their private rights. I’d like to make a motion that Melissa Kellam’s decision was in error” — Vice Chair Douglas Coburn, Board of Zoning Appeals.

All that is about to change. The Board of Supervisors is currently reviewing a new ordinance that would allow for the use of watch house to be used as short-term rentals: 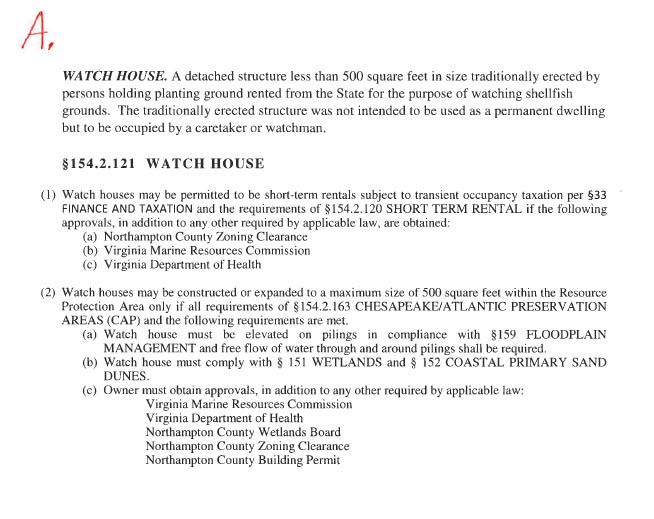 The question remains, what is the motivation behind this change? Who is requesting it?

The watch house thing has been dubious from the start; however, the end game is becoming more apparent. There is no question that the waterfront from Wachapreague to Oyster has been in the sights of certain developers for some time. The goal is to convert these working waterfronts to mixed used commercial/residential purposes. As we have witnessed in downtown Cape Charles, history will soon be overtaken and replaced by cheeseball commercial enterprises. The stakes are much higher in the County, where our pristine waters are in danger of being overtaken by condominiums.