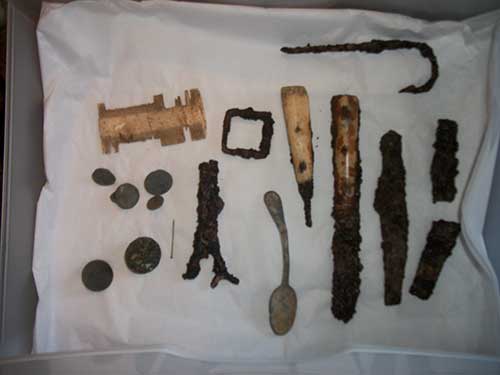 A few years later, in the Spring of 2013, Bill brought in his local antique tractor club for a fun “plow day” to help plow his corn field. With the ground turned up, his brother Bob Savage took the opportunity to use his metal detector to search the field. Soon, a large piece of metal was detected –it turned out to be an 18th century barrel hoop. More investigation unearthed clam and oyster shells with both halves still together. 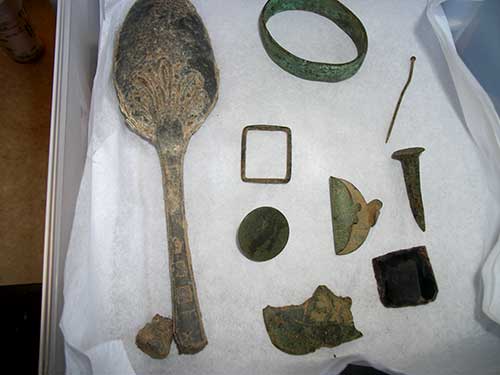 With this discovery, the brothers went to work and unearthed an intact 18th century brick lined cellar. In the weeks and months that followed, the Savages also located another brick lined cellar, five trash pits and four early brick foundations. It was a veritable treasure trove of early 18th century artifacts. While the brothers excavated and preserved the contents of the two cellars and part of one pit, they soon realized the historical significance of the site. At this point, they decided to find professional archeological help.

Note: In the two months they were actively digging on the site, they preserved ten cases of artifacts.

Several archaeologists have since been in contact with Mr. Savage, and have inspected the collections. It has been determined that the site was a “first contact” site between the English and the Indians. Further research has revealed that it also belonged to the Savage’s 12th great grandfather Richard Kellam who patented the land from the King of England in 1662. This lost Tobacco plantation turns out to be part of their family heritage –that is, the Savages have been planting corn on the same land once worked by their Eastern Shore forefathers. 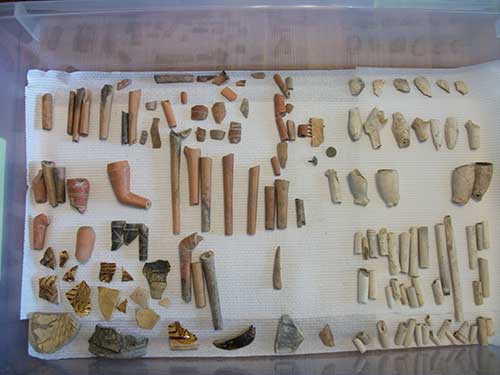 Excavations have also turned up a large collection of 17th and 18th century clay pipes, which created the inspiration for the Old Dominion Pipe Company which manufactures historically accurate corn cob and clay pipes. The corn cob pipes are made from surplus Indian corn cobs. Last year, a new clay studio opened which manufactures replicas of the 17th and 18th century pipes that are part of the current archeological collection.

Mr. Savage says his goal is to build a museum on the farm to house the growing collection and serve as an educational center in which children and adults can come to study and learn about early Colonial life here on the Eastern Shore of Virginia. “We want everyone to enjoy the discovery as much as we have.”

An archeological dig, sponsored by the Historical Society of the Eastern Shore, will be taking place on June 18th at Bill Savage’s Pungo Creek Mills. The 60×40 dig site has been pre-gridded. All artifacts recovered will be preserved and stored on the farm in preparation for the future museum.