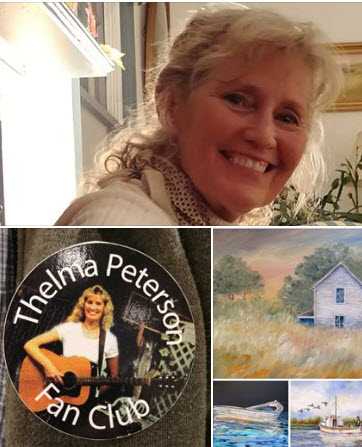 “I was given my first guitar at the age of twelve by a couple I babysat for. I rarely charged a fee. They surprised me with a Sears & Roebuck Silvertone guitar painted with cowboys playing music around a campfire. I did not know how to play but quickly went out and bought a Joan Baez album and songbook with guitar chords. I taught myself to play every song in that songbook.” –excerpt from Ted Shockley’s interview from Thelma’s Fan Club page.

Thelma Peterson will be debuting her new CD “Pull of The Moon” at the Lemon Tree Gallery in Cape Charles on Friday November 17 (Open Mic night) from 6-8 PM. The songs on the CD are all original works composed and sung by Thelma, with several spotlighting the Eastern Shore and its beautiful bay and barrier islands.

The CD will be available for purchase that night.

Thelma is also announcing her new Facebook fan club page where you can follow her new work and upcoming events.