It was confirmed this week that the tree cut down on the 100 block of Pine did not have either a Virginia Department of Highways permit, nor a town issued land use permit. In fact, it was taken down without the knowledge of the Town or VDOT. The response from the Town thus far has been nothing. In a conversation with Mayor Proto, he did note that he was concerned, but that, “They are old trees. There are trees near me, near Sea Breeze apartments, that look dead on top, and they may have to be taken down. They are old.”

Whether or not they are old, or need to be taken down is not really the point. The point is that folks are ignoring Town ordinances, and acting in a rogue manner that could have serious repercussions for the Historic District. The Mirror’s response to Mayor Proto was, “George, I can walk around Cape Charles and find any number of trees that ‘I feel’ should be cut down, using the most random and arbitrary criteria.” 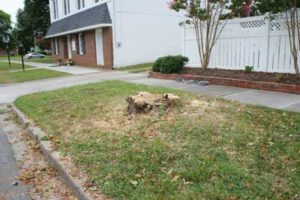 When you think about it, a wedding guest from out of town parks the wrong way on Mason Avenue, and the Town swoops in like Batman and tickets them. Yet, some character right out of the movie Texas Chain Saw Massacre just walks up and cuts down a tree, and the Town does nothing? What if I were to take my saw down to Mason Avenue, and chop down the tree in front of the theatre just because I don’t like the way the branches hit me in the face as I walk by? Shouldn’t I be able to do that? Just because it’s not on my property, why should that matter? The tree at 510 Monroe and on Pine were both in the right of way, not on anyone’s property—they took them down without receiving even a slap on the wrist.

Maybe we should capitalize on this misfeasance by having a fall festival called, “Chop Down a Tree Day”. It can replace the epic Tomato Festival or Tall Ships. We can have a parade, invite vendors, and everyone can take a chain saw and chop down a tree in the Historic District. It can add another layer to the Cape Charles Business Association’s effort to brand the town as part of the Main Street program.

I hate to break the news to the Town of Cape Charles, but trees are living things, and they have rights. Our trees not only represent an immaculate state of being, free of corruption, but also a connectedness, grounded in the earth. Trees don’t stand alone but live in our community. Maybe this is what all the new people that have moved here in recent years really want. They have successfully run just about everyone else out, the only thing remaining of old Cape Charles is the trees. If they cut all the old ones down, they can plant new ones that will grow up in their image.

If I find a tree that is old and sick, and appears to be posing a danger, the first order of business would be to go to the Town Planner and ask him to take a look with me. If we need to bring in an arborist, so be it (most will do an inspection for free, or a minimal charge). If it is determined that it has to come down, let’s do it with respect. If it is in the right of way, get a permit, or have VDOT mark it and schedule a time to take it down. If it is on your property, get a land use permit and schedule a tree service to do the work.

Before you cut it down, thank the tree for the  years it has been here. Place some copper in the ground, and for each tree you cut, plant three more.