I was lucky enough to attend George Mason University with one of the world’s great poets, Yana Dijin. Over the years and many drinks, Yana and I have talked about many things, and I have learned much from her. I do remember one morning in the early 1990s, after a long night of cigarettes and wine and talk, we decided to go out for something to eat. She had spilled wine on her outfit, and did not want to wear it out, so she dug into a garbage bag that was filled with clothes on the way to the Salvation Army. She somehow concocted the most incredible outfit, including mismatched Converse All-Stars (white high tops, with black oxfords). At the Keyhole Inn in Arlington. Va., we sat down for coffee, and the waitress, in all honesty remarked, “You are some snappy dresser!” Indeed. 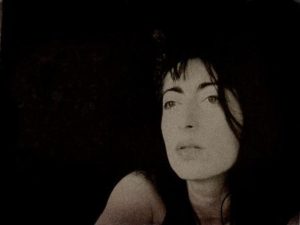 Yana Djin was born in 1969, in Tbilisi, Georgia. In 1980, she emigrated to the United States where she studied philosophy. Djin writes poetry in English. Her first book of poetry “Bits And Pieces of Conversations” was published in the US in 1994. Her poems in Russian translation were first published in 1997 in the “Literaturnaya Gazeta” under the heading “The New Literary Star” followed by the publications in the literary magazines “Druzhba Narodov” and “Novyi Mir”. In 2000, Yana Djin’s book of poetry (in English & Russian) “Inevitable” was published in Moscow. She now lives in New York. The Mirror is honored to be able to reprint, with permission from Yana Dijin and VoxPopuli, her latest poem, “and when the first snow falls”.
Copyright 2018 Yana Djinn

and when the first snow falls
over the river like a swarm
of butterflies blinded,
by their own white
and the dark stalls
its descent,
when the thoughts unbind,
burst like string of beads,
the old man, magnificent in his age,
holy, almost holy from inaction,
will close his eyes
and recall:
fingers entwined,
and try to remember
the name in the half dream.
But it will be the time for surrender,
too late for the scream,
then, there will be silence,
and the river will flow…
and the whiteness of snow…