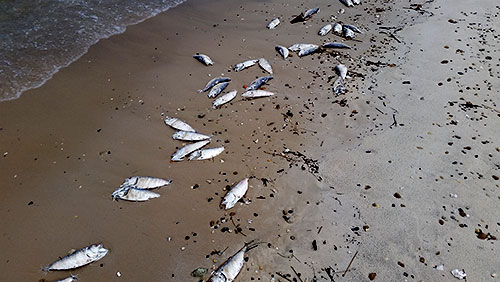 The second large fish spill in Northampton which, left thousands of dead menhaden washed up on beaches last Friday, July 1 has more questions than answers. The Mirror contacted VMRC to see if there were any updates, or whether there was an investigation under way. “As you know the VMRC has no regulatory authority over Menhaden VMRC issues licenses for this fish based on what is being caught i.e. Bait fish. The Virginia Department of environmental quality regulates and monitors water quality. Honestly you should call Omega Protein. They have said it was not their spill but they would pay for the clean-up. They said they had a spill out in the ocean and had serious doubts that the fish were from that spill.”–Linda Naismith, VMRC.
The spill Naismith refers to happened last Thursday morning, when part of the Omega fleet lost an estimated 200,000 menhaden. That spill, which occurred 2 miles east of Cobb Island, was reported to be caused by a ripped net.

Omega officials believe the fish that washed up near Latimer’s and Fisherman’s Island suffered from hypoxia, but that doesn’t really account for why they were missing their heads and tails.
While Omega employs 300 people, it also provides work to thousands of contractors. This is the informational black hole –who is accounting for vessels not officially counted as part of the Omega fleet? If they can’t sell their catch, do they just dump it? Is anyone aware if there is a ripped net or other event that causes a major spill? As the VMRC noted earlier, no one appears to have any hands-on regulatory control over this fishery, and while Omega Protein appears to work to employ measures that would limit this type of event, there does not appear to be that kind of scrutiny for independent contractors.

Menhaden stocks are managed on a coastwide basis by the Atlantic States Marine Fisheries Commission (ASMFC), under its Menhaden Fishery Management Plan. The fisheries commission, however, cannot compel a member state to comply with its rulings, but it can force an issue–by referring it to the U.S. Department of Commerce, which can take legal action against an uncooperative state, or even close a fishery.

Virginia is the only state that allows industrial-scale harvesting of menhaden in its waters. Oddly, Virginia’s menhaden fishery is the only one for which regulations must be approved by the General Assembly; all other fisheries in the commonwealth are the province of the Virginia Marine Resources Commission, VMRC.) At this point, it is apparent that Menhaden oversight is desperately needed in Virginia waters—local oversight finally needs to be shifted away from the General Assembly, making the overarching regulatory body the Virginia Marine Resource Commission.
There have been efforts, yet even this year, HB150 and 151, bills designed to change how menhaden are managed in Virginia, were tabled in the Committee on Agriculture, Chesapeake and Natural Resources Chesapeake sub-committee.

“You fight the the good fight. But they (Omega Protein of Reedville) had all their big lobbyists they paid to keep their purview. But I don’t back down from anybody and I’m going to represent my people and I’d do this again next year. I want to put this in the hands of the scientists.” — Barry Knight, Delegate from Virginia Beach.