Salt Grove, a small slice of the Shore that rubs against Cherrystone Inlet and Eyre Hall Creek has become an iconic symbol for the tensions and stasis that is more and more beginning to define life in Northampton County. At stake is the lifestyle and quality of life that Eastern Shore residents have come to cherish, and which is being threatened by the ever-increasing pressure and footprint of developers. At Salt Grove, folks trying to raise families have had their bucolic homes besieged by loud parties and wedding events taking place at the old landing. That location now houses several structures that have been (retro)fitted with bedrooms and baths and together functionally create an ‘event’ space. Previous access to the water (docks) and private clam beds has also become problematic.

These issues began in the fall of 2006 after Hurricane Ernesto supposedly caused damage to the existing bulkheads on the western portion of the property (this damage has been refuted by local landowners). The owner, Eyre Baldwin (Salt Grove, LLC) used this opportunity to build a new bulkhead. However, rather than replacing the existing bulkhead, the new one was built out 10 feet channelward, extending further out into the wetlands, thus increasing the property’s footprint. A new 10 x 16 dock was built to the new bulkhead. The excuse for moving the bulkhead out was to create a more robust tieback system. In the process, approximately 200 square feet of State owned subaqueous bottom, 500 square feet of vegetated intertidal mudflat, and 500 square feet of vegetated tidal wetlands were impacted.

The damage to these wetlands was done without a permit. 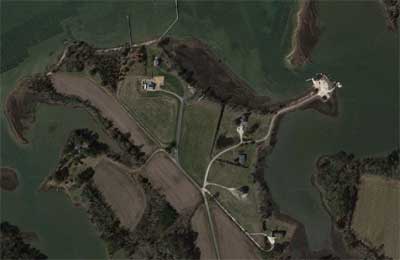 The work did not stop there. Baldwin also built a floating dock, new pilings and a gangway (ramp)  A concrete pad to the east has been constructed. The owner has attempted to eradicate phragmites near the slab, and has added a geotextile base and covered it with shells. Disturbances to the wetlands did occur.

After the illegal construction and damage to sensitive wetlands was discovered, the owner submitted an after-the-fact permit application to the Northampton County Wetlands Board for the work that had been done. The Board met in October to review the request.

During public comments, the owner, Eyre Baldwin admitted that, “he had done it without getting permission”, however, “this is not an issue about permits, it is an issue about principles, personalities.”
Other members of the public disagreed, arguing that Mr. Baldwin was quite aware of what he was doing, and that such a small fine would hardly act as a deterrent, and would be treated by developers as merely the cost of doing business. That Mr. Baldwin, his contractor, and his attorney would not know that a permit would be required to work around wetlands does not seem logical. In this County, a person cannot swing a dead cat without hitting one of Mr. Baldwin’s applications somewhere. Baldwin has recently been involved in at least three wetlands permits around Cape Charles Harbor in the last few months.

Board Member Bob Meyers summed up the general feeling, “He doesn’t get it, this is what it is all about. It is about that he did not ask for and get the permit that he knew he needed to have. And then when he got permits, he violated them. This whole issue is about permits and it is unfortunate that he does not understand that. And he stands up in front of us and tells us it is not about permits. It is shocking that his attorney has not told him it is about permits. Everyone acknowledges that there are clear violations going on. The owner was intelligent enough to know that he was doing something improper and yet everything went ahead anyway. I am concerned about this attitude of total disregard of what the rules are when everybody else has to abide by them. If this gentleman is given a free pass it sets a very bad tone for the entire community. This is a dilemma for the Board, we have something that has helped the area and is being used, possibly improperly as residence, which it is not zoned for, and a clear violation of permits and the rules that are set up in the County. We need to address that.”

During public comments developer Bill Parr argued that despite the gross violations by the owner, since Mr. Baldwin had restored the property and hence is growing the tax base, a “regulatory compromise” would benefit the community as a whole. The Wetlands board tended to agree–even with the violations, the consensus was that removing the illegal construction would do more damage to the environment than trying to restore it to its previous condition. After regarding the unpermitted issues such as the filling of the wetlands on the property, the Wetlands Board issued permits after-the- fact, imposed a $7,500 fine and required Baldwin create 548 feet of vegetated wetlands on property he owns.

While there was a $7500 penalty, many in County feel that the punishment hardly seems to fit the crime. It is understood that the Board is limited in what it can do, but others have commented that a $750,000 fine, 4 weekends in the County jail, and being banned from the property for 10 years would have provided more of a deterrent and would send a message to developers that Northampton is not for sale (metaphorically). County Attorney Bruce Jones still has the opportunity to address both civil and criminal charges in this matter.

While there was an opportunity to send a clear message, so far, that has not happened. Instead, a new policy of “regulatory compromise” won the day. That is, “as long as you make it look pretty, go ahead and do whatever you want.” It appears that the foxes are now fully in charge of the hen house.

It has been said before, but who is watching out for the little guy?

The saddest lesson of the Salt Grove incident is that the County has given developers carte blanche to destroy the lives of ordinary families that just happen to be in their way. The construction of a ‘watch house’ and grading shed at Salt Grove is a joke. This is an illegal event venue, a playground for the rich, built at the expense of ordinary working folks. While the County has given notice and halted non-permitted events at Salt Grove for the time being, the County Planning Commission is working to draft proper language that addresses so-called ‘event venues’.

The end game is to develop every piece of waterfront property on the Eastern Shore until it rivals Hilton Head, South Carolina. While geographically small, the incident at Salt Grove is a giant step towards achieving that goal. Oyster, Willis Wharf…better get your waders ready.