A group of aquariums, including the Virginia Aquarium & Marine Science Center in Virginia Beach are opposing  seismic blasting along the East Coast as part of efforts to extract offshore oil and gas.

Seismic exploration surveys generate the loudest human sounds in the ocean, short of those made by explosives. The blasts — which can reach more than 250 decibels and be heard for miles — can cause hearing loss in marine mammals, disturb essential behaviors such as feeding and breeding, mask communications between individual whales and dolphins, and reduce catch rates of commercial fish. Adding insult to injury, the Trump administration is even proposing to amend the guidance document that assesses seismic damage to wildlife, part of its effort to undermine science.

Seismic testing involves blasting the seafloor with high-powered airguns (a kind of powerful horn) every 10 seconds and measuring the echoes with long tubes to map offshore oil and gas reserves  — in the process disturbing, injuring and killing marine mammals and other wildlife around the clock for years on end.

The six aquariums are all on the East Coast, and they say they oppose the recent affirmation of sound blasting from Delaware to Florida by the National Oceanic and Atmospheric Administration.

The aquariums say they’re worried noise pollution caused by the blasting could harm marine life, all the way from microorganisms to giant whales. They also fear disruption of valuable commercial fish. 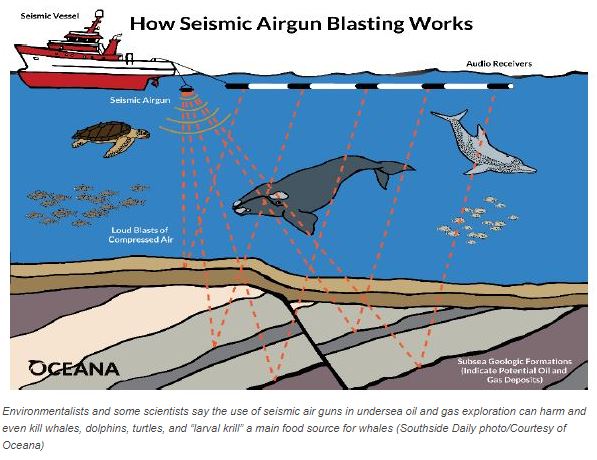 The participating aquariums are the New England Aquarium in Boston, National Aquarium in Baltimore, the Mystic Aquarium in Connecticut, the Virginia Aquarium & Marine Science Center, the North Carolina Aquariums and the New York Aquarium and its parent Wildlife Conservation Society.