On December 21st, an eight-hour mediation resolved activities over the Peninsula Airport Commission’s use of taxpayer funds to pay off a People Express Airlines loan.

The $2 million that TowneBank and the commission’s former law firm agreed  to return to the Newport News/Williamsburg International Airport is less than half the $4.5 million of taxpayer funds used to repay the airline’s debt to TowneBank.

“I think it sends a message to the board (the state Aviation Board) and airports across Virginia to take better care of public money,” Secretary of Transportation Aubrey Layne said. Layne believes this message about the stewardship of taxpayer funds will echo across state government, “There needs to be an understanding — it’s their money, it’s not the state’s money. That’s the biggest thing we have to stand for — it’s their money.”

Layne will be Virginia’s secretary of finance in the new year, and while concern seems to run deep on the other side of the Chesapeake Bay, one has to wonder if the same will carry over to the Eastern Shore, where the misappropriation of taxpayer funds used to construct the Route 642 Connector Road in Cape Charles is close to $12 million.

History
In the Northampton County Court Records Book 249 page 873 -May 17, 1991 it reads WHEREAS, Purchaser (Brown & Root I, Inc.,) is considering purchasing the Property and constructing certain improvements thereon, namely a road for the purpose of providing ingress and egress to Accawmacke Plantation, and desires to investigate the feasibility of constructing the road on the Property.

In November 1991, Brown and Root had agreed to the Connector Road provisions found in the Annexation Agreement (the “Settlement Agreement”).

So, why were property owners Vernon and Betty Martin involved in the Annexation Agreement? Language in the deed, and the agreement states the intent of Brown & Root to acquire the Martin property to resolve the issue of the ‘connector road’ as requested by the Town and the Commission on Local Government – why else acquire the land and force the Martin’s into the Annexation Agreement?  Their land was not part of Brown & Root’s property, it was in the County. 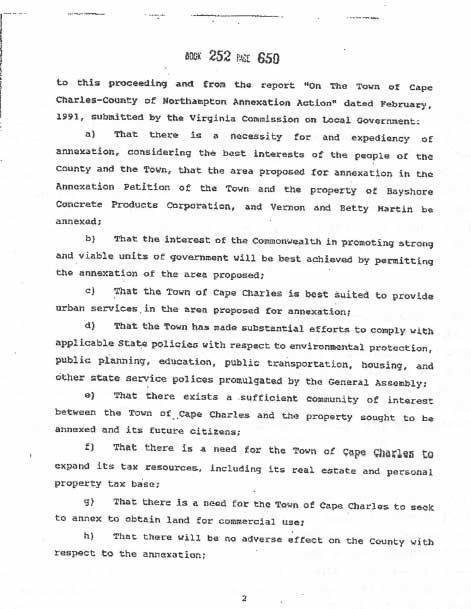 In 2016, the Mirror contacted the Attorney General via VDOT officials and asked about the Martin tract, specifically whether Bay Creek South, LLC, as successor in interest to Brown & Root, Inc., Brown & Root I, Inc. and Kellogg, Brown & Root, Inc. as developer and primary owner of Bay Creek, has an obligation to construct VDOT Project No. 0642-065-577 (UPC103391) at its sole expense?

VDOT told the Mirror: VDOT believes that Bay Creek South, LLC has a legal obligation to construct VDOT Project No. 0642-065-577 (the “Project”) at its sole expense.
The Annexation Order entered by the Circuit Court of Northampton County on November 26, 1991 and recorded among the land records of Northampton County on December 9, 1991 in Deed Book 252 at page 649, obligates Brown & Root I, Inc. to “construct or have constructed a new two-lane access road into its development to accommodate traffic from [Bay Creek, formerly known as Accawmacke Plantation], provided the necessary land and easements are acquired and providing all necessary permits are obtained.”

Also, the Acts of the General Assembly of 2002, shows the updated Assembly’s recognition of the Special Annexation and Circuit Court Orders. There is no Statute of Limitations as to Bay Creek South, LLC being responsible for the “Connector Road” as governed by Law No. 27.

More background
Tucked away in the minutes of the August 2014 Board of Supervisors meeting, is a note about the Cape Charles Access road:

The budget is being updated? This appears to be an attempt by Northampton County Board of Supervisors in August 2014, to circumvent the Court Order and have Northampton County buy the right of way and have the State pay for the Connector Road, which should be considered a misuse of public funds. As a side note, D-2 Supervisor Larry Lemond wore two hats, also serving as Richard Foster’s lead at H J Rail.

The Special Annexation Court which approved the annexation, stays in place for five years in case there are disputes. The court was never called upon in any of these matters. That seems odd given Mr. Foster sold his interest in Bay Creek to Keyser-Sinclair in March 2008, and with it Baymark’s obligation to the town and county. Question: Was this an attempt by the county to shove all of this under the rug?

The issue still remains unsettled, open to argument or even debatable. The question is whether Law No. 27 is valid as a legislative act of the State of Virginia. It is a legal question which has to be  determined by a special investigator, and ultimately a decision by the Legislature.