“His usual note was this demoniac laughter, yet somewhat like that of a water-fowl; but occasionally, when he had balked me most successfully and come up a long way off, he uttered a long-drawn unearthly howl, probably more like that of a wolf than any bird; as when a beast puts his muzzle to the ground and deliberately howls. This was his looning — perhaps the wildest sound that is ever heard here, making the woods ring far and wide. I concluded that he laughed in derision of my efforts, confident of his own resources”–Henry David Thoreau, Walden. 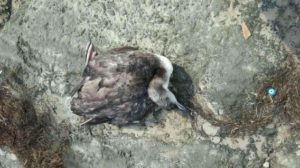 While the loon described by Thoreau may have escaped hunters, and even the writer’s canoe, a loon found at the Cape Charles Harbor was not so lucky. A tourist located a distressed loon by the visitor’s entrance, and according to sources, notified the Harbormaster, attempting to get them to aid the bird. It was reported that the town staff refused to help the bird. It died sometime later.

Note: In many cases, when the roadway is shining, a loon may mistake it for water, and when they come in for a landing, may get scraped and banged up. This is perilous for loons, because they cannot take off from land, only while in the water. Due to the backset center of gravity, which is designed for paddling and deep diving,it is very hard to move or take off from hard services. Also, given the wave action over the last few weeks, the loon may have been beaten up by the surf; the course of action here is to take it to a baby pool, let it hang out and eat fish until it gets its strength back. Loons are big eaters; a hungry loon family (parents and 2 chicks) can eat about a half-ton of fish over a 15-week period. Once stranded on land, their strength can diminish quickly.
The Mirror contacted the Town and was told that in the past, the Harbormaster has attempted to contact various agencies and organizations to respond to distressed birds in the harbor. According to the Town, none of the agencies will respond.

While there may be room to dispute this claim, it does expose a gap in knowledge, not just at the town level, but for the community in general.

There is a comprehensive list of licensed wildlife rehabilitators kept by the Virginia Department of Game and Inland Fisheries. It is accurate and up-to-date, and you can locate one close to your area using this website: https://www.dgif.virginia.gov/wildlife/injured/rehabilitators/?fips=131.

The Mirror contacted Kathy Cummings, one of the licensed rehabilitators for the Virginia Eastern Shore, and she told us that when you come across an injured animal, such as this loon, you must gather it and transport it to a veterinary clinic such as Eastern Shore Animal Hospital. From there, the animal will be treated and then released to a rehabilitator, who will get it back up to speed and eventually release it back into the wild. If you don’t know how to handle the animal, contact the rehabilitator and they can help you (depending on the size and type of animal, this contact is recommended. Don’t try and move a Great Blue Heron or Pelican unless you know what you are doing).

Bottom line, the agencies cannot come and get every animal that is found—they already receive hundreds of phone calls a year. It is our responsibility to take the initiative to help these animals. For the public sector, more training and set procedures on how to deal with distressed animals, especially migratory birds is a logical next step.