The menhaden spills at Smith Beach and south near Latimers and Kiptopeke have brought to the forefront an issue that has been troubling Bay residents for many years now—just who is managing the Menhaden fishery, and why has there been nothing done by the Virginia legislature to protect the Eastern Shore from what many consider unsustainable and abusive techniques that are harming our business and environmental interests? In this special report to the Cape Charles Mirror, RH Meyers provides correspondence and a dialog he has had with our County Board of Supervisors, as well as the Virginia Marine Resource Council (VMRC).  THE BIG QUESTION:   Will anyone who has a stake in the negative economic impact take an effective leadership role toward a resolution.  If not, this mess will continue to occur every year as in the past with lots of “hand-wringing” and then forgetfulness—until the next occurrence.
There is a dearth of persons in the County who are willing to expend the time and energy to fill the necessary leadership role, not only for this, but for all the help needed on the County Boards and Committees.

RH Meyers Presentation to the Northampton Board of Supervisors:

1. Please refer the attached code that allows an unlimited amount of fish to be dumped in the Chesapeake. (194)
BUT it does not allow those fish to “substantially impair the lawful use or enjoyment of such waters and their environs by others” (194.1) I think you will find that enforcement of 194.1 is not considered possible by VMRC even though it is VA law and they have an armed police force on water, air and land. Industrial menhaden operations are NOT EXEMPT from the described impairment.

2. Industrialized fish production IS NOT COMMERCIAL FISHING any more that Perdue is a traditional chicken farmer. That concept seem to be lost on the commercial watermen of Accomack as they openly treat VMRC as the enemy of watermen. The concept is also not understood by Del Bloxom well enough that he can present it to his watermen constituents.

3. Both Del Bloxom and Sen Lewis are fully aware of the results of an Apr ’15 meeting I had with VMRC Commissioner John Bull. Head of VMRC Fisheries Rob O’Reilly, Advantus Strategies representative Robert Crockett and Susan Gaston from her Public Relations firm representing Omega Protein to address the continuing fouling of the Northampton beaches. That meeting was made possible by Sen Lewis as a Del. The fouling from industrialized menhaden production has happened nearly year in the past affecting some part of the Northampton County area & continued every year since in various degrees. This year, the two big spill occurrences at the beginning of a major visitor influx and the opening of the new Sunset Beach Area were particularly egregious.

4. There is another threat suffered by recreational fishing and charter boat captains. I have been told that these groups have been pushed of fishing spots by the industrial vessels bearing down on them with horns blaring to take over a fish rich position. This information has been relayed to bait and tackle shops by their patrons.

5. A substantial and very obvious negative economic impact, to tourism, recreational and charter fishing results from the continued spills. That needs to be quantified & fleshed out with specifics, and may be an appropriate task for the Economic Development Director if he is willing and capable.

6. This degradation to the economic benefits from those who come to Northampton County to visit and recreate cannot be changed by any one group of people. It will take several groups explaining and convincing our legislators at the state level to make changes. Support for a legislative change needs to be far wider than now exists. Maybe support for a solution can be had from our western legislators if a connection can be made to past media reports of waters being fouled in other areas of the Commonwealth by industrial processes. Groups on the Eastern Shore that should be involved are Tourism Board, Chambers of Commerce Board of Supervisors and individual business who are on the front lines of the threat.

The question is:
Will the effort be made to have the impact translated into dollars lost to the County, and does the interest exist among tourism and the business groups to stand up and fight as a unit for those they are supposed to represent.

Please read the following comments and the section of the Va Code into the public record at your 28 Jun 16 meeting.
This is in reference to the fish spill off Nassawadox Creek on Tuesday morning 21 Jun 16.
The Spill was not cleaned up as of Friday afternoon. The 2 crews that came on Thursday afternoon cleaned up the YMCA camp beach area but there were still some dead fish floating in. They did not do the 3 mile area to the north or south to Silver beach. The crew that was at Silver Beach community swim area, cleaned that area but did not touch the 1 mile of beach south of there to Nassawadox Point nor did they clean the 3/4 mile community swim area between Nassawadox Creek to Westerhouse Creek.
This appears to be lack of supervision and poor communication. 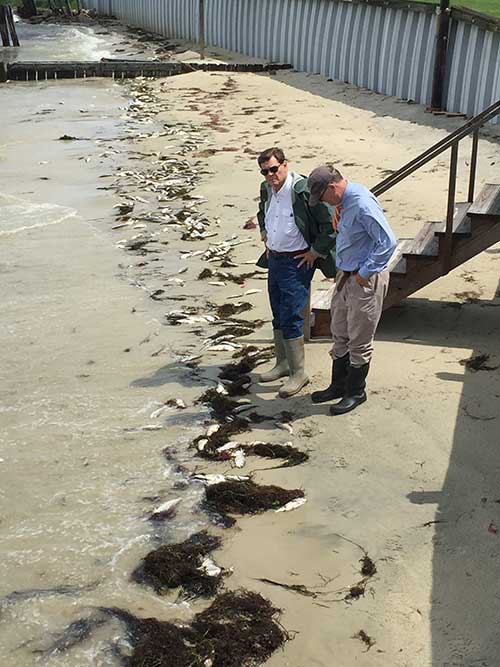 I tried to call Jimmy Kellum, the boat operator at 804-761-0673 to report the failed efforts on Monday midafternoon immediately after I was given his contact but he has not returned my call as of this writing.

Fortunately the slightly higher than normal high tides on Thurs & Friday night carried 90% of the mess back into the Bay and property owners did the residual cleanup. The picture of the heavily fouled area I sent Commissioner Bull on Friday was in a natural tidal swirl and did not clean itself. The property owner hired a crew of six and had it cleaned up on Saturday morning taking a bit more than 4 hours as the fish were at least 3 layers deep, solidly packed and mixed with seaweed. This area would have been unusable otherwise.
Today, I had a conversation about the spill history with a person in the southern part of Northampton County. In addition to the recent past beach fouling in the Kiptopeake recreation area, I was informed that both charter boat captains and recreational fishermen have had menhaden trawlers run at them with horns blasting to get out of the menhaden boats path and leave the area where they have been actively fishing before the trawler arrival. I am encouraging those who are subjected to this intimidation to document it with video with the specifics of the vessel involved for presentation to the news media.

These continual beach messes and menhaden operator intimidation to recreational boating along the Northampton shore is intolerable!!!! The fact that a Texas industry and a few others can come to the shores of Northampton County and destroy our income from tourism and recreational fishing while making the shoreline foul smelling and unusable for both visitors and residents is not an acceptable business practice. In fact, it will guarantee that there will be a concerted effort to remove their obnoxious operation from the lower Chesapeake altogether.
VMRC has Virginia Code as a tool to get the attention of the offenders. 194 allows discharge into state waters of unlimited amounts of fish BUT
194.1 prohibits anything dumped from substantially impair(ing) the lawful use or enjoyment of such waters and their environs by others.

The menhaden industry can dump fish but they cannot pollute the environment to the detriment of others! Ref VaCode 62.1-194.1