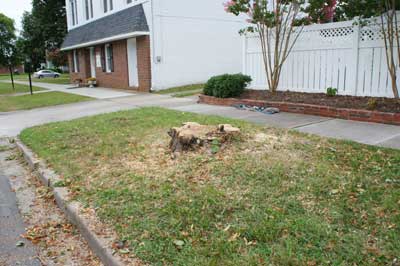 The Cape Charles Mirror was notified this week of another tree being taken down, this time near the 100 block of Pine Street. The crew was just leaving when the Mirror arrived; while it was not a VDOT crew, the identity of the contractor (red trucks) could not be obtained before they drove off. The Cape Charles Mirror contacted Town staff to see if a permit had been issued for this tree removal. Staff told the Mirror that the Town had not issued a permit. Staff also told the Mirror if a VDOT crew is in Town, they will know about it (VDOT usually gives notice if a crew is scheduled). The Mirror was told that they would email Dale Pusey to find out whether VDOT had issued a permit for the removal of this tree.

The CC Mirror attempted to contact Town staff and the Mayor several more times to confirm whether a VDOT permit was pulled for that site, but as of this publishing, we have not received information one way or the other. While staff is generally very forthright with the local press, in this instance, they have not provided any information in regards to this tree.

This rogue behavior, citizens by-passing town code has the potential to adversely alter the Cape Charles Streetscape. With members of the Historic District Review Board and the Planning Commission setting a precedent by openly advocating and promoting the notion that citizens should ignore Town ordinances and then use subjective reasons to justify their actions could lead to more violations such as occurred at 510 Monroe. A walk around Cape Charles reveals many old trees that could be taken down using the flimsiest of arguments. It the Town won’t speak for and protect these trees, who will?

The silence coming out of Plum Street is deafening.