Salt Grove, a quiet section of Cherrystone Creek, known for its bucolic peace and beauty, has in recent months become the scene of turmoil, tumult and even assault. The Virginia Marine Resource Commission and the Northampton County Wetlands Board have weighed in with fines for gross environmental violations at the site. The Northampton Board of Zoning is the latest entity to be pulled into the conflict. Thornton Tayloe, who owns property adjacent to the Salt Grove “complex” owned by Eyre Baldwin and Salt Grove, LLC appealed the decision of the zoning administrator to grant a zoning clearance for a “watch house” for the purported shellfish grounds on the property owned by Salt Grove LLC. 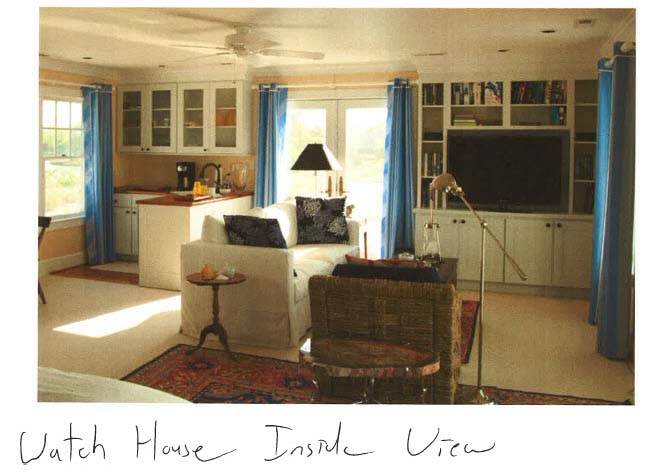 Luxury accommodations for the watch stander at Salt Grove.

The structure had been used as an event/vacation rental sometime in the past, however the 2016 zoning ordinance removed that use, which prompted the owners to submit an application for a new use as a shellfish watch house. The definition for a watch house is somewhat slippery, if it even exists at all. It was noted during the BZA hearing that there was occupancy by a caretaker, or watchman where he might sleep over on the premises. The county zoning administrator Melissa Kellam stated that the county was careful that the structure would not be considered a residence or have a residential use. “I thought a watch house might be some place where a person watches over a property, like a caretaker, so I did keep this in mind if there are sleeping quarters, it cannot constitute a residential use,” Kellam said. 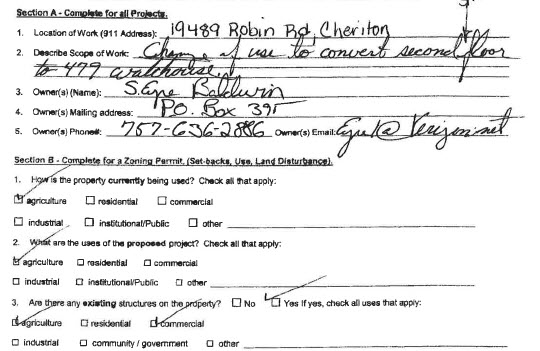 Application states that the uses will be Agriculture and Commercial.

The Commonwealth did permit watch houses sometime in the past. “In my mind, it can be many different things,” Kellam said. Applicant affidavits stated that George Baker would be acting as a watchman. Kellam stated that the use was by right, and it “was a watch house”. Kellam also noted that as part of the determination, she used the net floor area because it was a use by right. 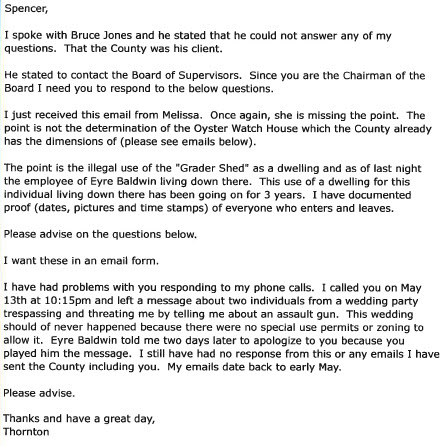 Correspondence between Tayloe and the County

Thornton Tayloe summed up his complaint to the board, “ I appeal this for the following reasons. The structure is well over 1000 feet and is currently permitted as a grader shed. The upstairs is being used as a dwelling or an apartment. The apartment was advertised for $300 per night on the Cape Charles Rentals web site and has had multiple renters for over two years. The county finally stopped this activity in August 2016 because it was not zoned or permitted for this use. Right now it is occupied by a watchman who is staying there without a certificate of occupancy. The apartment on the 2nd floor is well over 500 sq feet, (over 600 ft per floor, over 1200).

The building has all the amenities that should not be in a watch house; central heating and air, kitchenette and a full bath. Zoning codes state that dwellings contain eating, sleeping provisions, as well as sanitation. A watch house may contain sleeping quarters but not all of these other provisions. A watch house is a free standing structure and should not be attached to any other structure; I have found no examples where a watch house had been carved off an existing building. The grader shed was built without a land disturbance permit, but Baldwin built it without a permit because he knew he would not be able to get a permit to do what he has to. We have been dealing with problems here because of this for over a decade.” 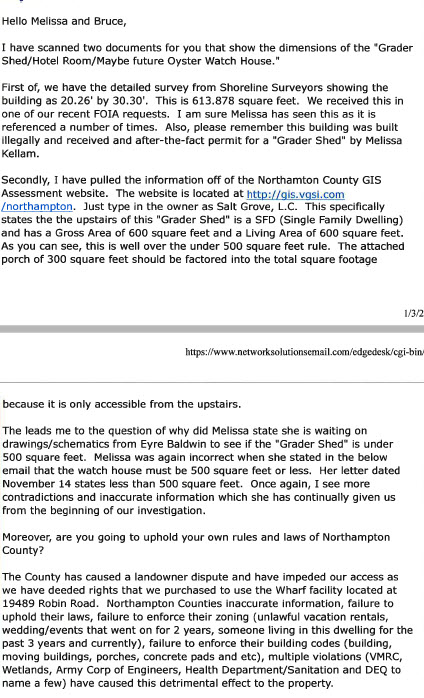 Correspondence between the county and Tayloe.

Kate Tayloe also addressed the board, “This is what happens when you design and build without any regard for the rules and regulations. He (Baldwin) has built a building that is not really a grader shed, never has been used as a grader shed, it’s not a supposed to be a dwelling and it does not follow the provisions for being a watch house. I hope you have been able to see a pattern of disregard for the rules and the position it puts everyone in. If the county would follow and enforce its own zoning code, we would not be in the situation we are in today.”

Attorneys for Salt Grove, LLC argued that the approval was based on the determination by the zoning administrator, and “if she calls it a watch house”, then it is a watch house, which is a a by-right use for that parcel. Attorneys also went to a ‘go-to’ strategy employed by municiplaities across the state—that a person must have standing, or be an aggrieved party in some way, and that Mr. Tayloe has no direct interest in the watch house per se. 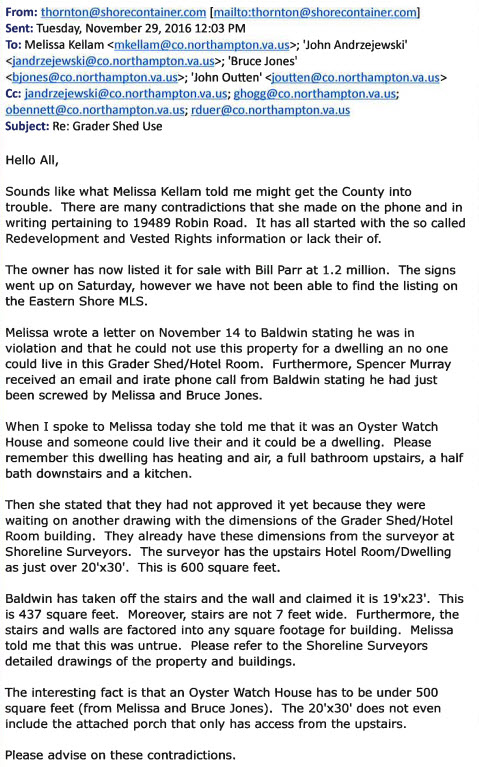 Correspondence between Tayloe and county.

The board, attempting to determine the validity of the watch house asked Salt Grove attorneys, “Has he ever observed anyone stealing oysters?” The attorneys noted that there had been a shellfish heist, but it was never reported or recorded, and no actual evidence of the heist was presented to the board.

After hearing the evidence, Vice Chair Douglas Coburn made a motion to overturn the zoning administrator’s decision to approve the watch house application, “It seems to me that it was a residence that became a watch house in order to circumvent zoning. Whether we have a real definition of a watch house, ‘that it shall not obstruct navigation nor injure the private rights of another person’, I think this comes close to injuring their private rights. I’d like to make a motion that Melissa Kellam’s decision was in error.”

The motion did not receive a second, and no discussion followed. Board member Bonnie Nottingham appeared confused about next steps and attorneys for Salt Grove offered to provide a legal brief. A decision was postponed until the BZA meets again on March 14th. 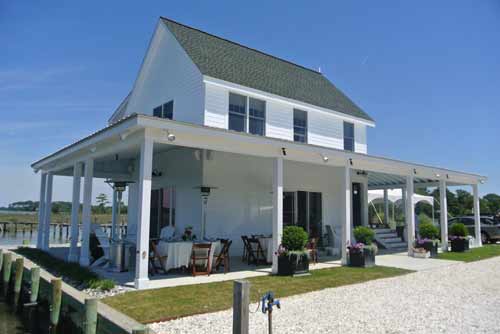 To the average by stander, calling this structure at Salt Grove a watch house seems dubious at best. All you can say to that is, “C’mon, man”.

What the BZA will eventually say on the matter could set a precedent for Northampton County for a long, long time.

Correspondence between BoS Chair Spencer Murray and the zoning administrator. 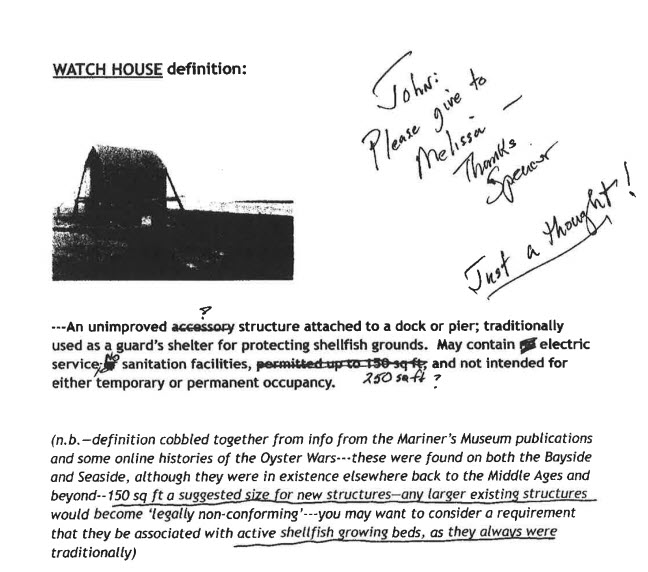 BoS Chairman Spencer Murray intervened and sent this to county staff. Why?