While researching for another article, I came across a term I had never heard before–Generation Jones. If you were born between 1955 and 1965, you were more likely to have grown up watching The Brady Bunch rather than Leave It to Beaver. If you remember President Kennedy’s funeral at all, you mostly remember your parents’ reaction to the loss, rather than feeling a loss yourself. You were too young to protest the Vietnam War. You are part of what is being called Generation Jones.

It’s the club for misfits–those who are neither hippy Baby Boomer nor techie Generation X.

The term itself comes from the word Jonesing, to have a strong need, desire, or craving for something. Really, it was about needing drugs or alcohol. The term originated with heroin users–they used it to describe their withdrawal symptoms.

Jonathan Pontell, who coined the term for this 53 million-member-strong generational segment, describes this generation as stuck “between Woodstock and Lollapalooza.” They didn’t buy into or were too young to understand the Baby Boomer tantrums, yet they were a tad too old to join the Gen-Xers in the mosh pits.

Note: Pontell is way off here.  Real Jonesers invented the mosh pit and were active in the Grunge wave created by Nirvana, Sound Garden, The Melvins and Alice in Chains. We still go to see Nine Inch Nails during the work week.

So who are we? We are practical idealists, forged in the fires of social upheaval while too young to play a part. The name “Generation Jones” derives from a number of sources, including our historical anonymity, the ‘keeping up with the Joneses’ competition of our populous birth years, and sensibilities coupling the mainstream with ironic cool. But above all, the name borrows from the slang term ‘jonesin” that we as teens popularized to broadly convey any intense craving.”

Any generation is defined by shared experiences of historical events and cultural influences during the developmental and formative years, and that generations generally span 10 to 12 years. The classification of Baby Boomers as a “generation” based solely on annual birth rates, from 1946 to 1964, was actually a misclassification. The emergence of so-called “late Boomers” as a subgroup of Baby Boomers was a start in correcting the error, and then Pontell’s research further revealed that the second half of the Boomers were different enough from the first half to break away from the classification altogether.

According to Pontell, Boomers and Jonesers share some traits, such as idealism, but they behave differently. Members of Gen Jones tend to be more practical and rational in their approach to change. Their childhood years were inspired by the positive social change brought on by the Baby Boomers, but then sobering events of the 1970s—including Vietnam death tolls on the evening news, Watergate, the oil embargo, rising inflation, and unemployment—forced them to be pragmatic as they entered adulthood.

By the time they became young adults, the Vietnam war had ended and Watergate had started. Unlike their older siblings, they had to look for work during times of high unemployment and rising inflation. The idealist folk music they grew up listening to had been replaced by thumping disco music encouraging escapism from the real world into the world of partying all the time. The film Saturday Night Fever captures this lost, metallic taste in the mouths of kids growing up in the 70s. The television shows they watched as kids did not reflect the Ozzie and Harriet family structure. Instead, The Brady Bunch showed the rising blended family structure. Julia showed how a professional, black, single mother can raise a well-adjusted child.

Of course, this is a gross over-characterization. In many ways, so many Gen Jonesers have more in common with Boomers. Real Generation Jones is an even a smaller, niche sub-category.

While Disco is part of the narrative, real Jonesers, such as the full-scale rejection soaked into the film Repo Man, were the first to reject mainstream rock. They hate the Beatles, (as well as Disco), and took this hate and anger to the streets with punk bands like The Clash, Ramones, Sex Pistols, The Damned, The Misfits, and The Dead Boys.

Punk is obvious, but what is less talked about is the birth of Rap and Hip Hop in the 1970’s. Generation Jones is the first to accept Joseph Saddler, or Grandmaster Flash, who is considered to be one of the pioneers of hip-hop DJing, cutting, scratching and mixing. Grandmaster Flash and the Furious Five were inducted into the Rock and Roll Hall of Fame in 2007, becoming the first hip-hop act to be honored. In the mid-1970s, he formed Grandmaster Flash & the 3 MCs with Cowboy, Melle Mel, and The Kidd Creole. Cowboy created the term hip-hop while teasing a friend who had just joined the U.S. Army, by scat singing the words “hip/hop/hip/hop” in a way that mimicked the rhythmic cadence of soldiers marching. Cowboy later worked the “hip hop” cadence into a part of his stage performance. (source Wikipedia). 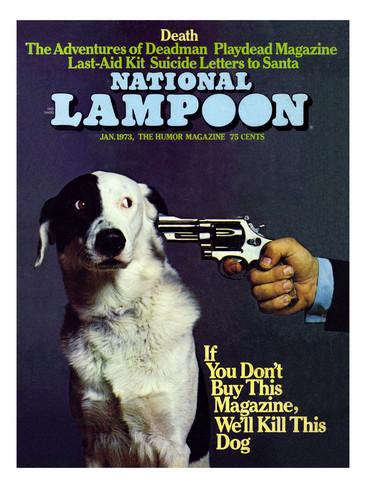 National Lampoon sums up Gen Jones–its sensibility and approach to comedy were so different from the previous generation’s. While they liked and appreciated Mad Magazine, it was the Lampoon that they really wanted–mainly because it had lots of tits.

Guys like Doug Kenney, P.J. O’Rourke, Michael O’Donoghue ignored the past, the boomers, and wrote for their generation. They wrote about sex and drugs, and they didn’t care if their parents didn’t get it. They especially didn’t care who they offended.

“You start out with Mad magazine, and you go right through the sort of black humor of Lenny Bruce, Lord Buckley, Mort Sahl, Paul Krassner… If you put Lenny together with Mad magazine and run it through the brain of a college student, you get National Lampoon.” — P. J. O’Rourke. Or as O’Donoghue would say to anyone still listening, “Making people laugh is the lowest form of comedy.”

Like punk, Joneser comedy was a rejection of the older, “Dad” comedy. You know, the kind of jokes your witless uncle, the one that wears white socks to the beach would tell. Instead of Bill Cosby, Bob Hope, Jerry Lewis or even Johnny Carson, they listened to vinyl or 8-track recordings of Richard Pryor, George Carlin or Cheech and Chong (although, there was always a soft spot for Rodney Dangerfield).

Animal House, a raucous tale of a disenfranchised college fraternity that memorably features the late John Belushi imitating a zit, is practically a metaphor for Generation Jones. Dean Wormer, ROTC Niedermeyer, and preppy Greg Marmalard against the Jonesers at Delta House.

“Animal House is fucking funny, and white people are crazy,”- note sent by Richard Pryor to Director John Landis after he had seen a screening, and heard the studio wanted them to cut the roadside bar scene. “It was like a papal blessing,” Landis said.

The original cast of Saturday Night Live, with Bill Murray, speaks for itself.

On Doug Kenney’s suicide/death off a cliff in Hawaii, Harold Ramis, his screenwriting partner on Animal House commented, “Doug probably fell while he was looking for a place to jump.”

Satire and General Disdain…about Everything and for Everyone

Growing up knee deep in their father’s and older brother’s Vietnam blood, no real prospects and with the Sex Pistols lyric “No future for you!” ringing in their ears, real Gen Jonesers are full of satire and dripping with disdain for everything–political parties, voting, and people in general:

The Boss: You know, your satire is not going to get you anywhere in life.

Joneser: Oh, yeah? Well, last year I got a free trip to Rio de Janeiro to compete in the International Satire Competition.

Although there is disagreement about exactly when Generation Jones begins and ends (Pontell says 1954 to 1965, while others argue it goes up to 1967), the point is that there was a generation between the Baby Boomers and Generation X that has been lost between the cracks. That’s kind of how they like it though. Cracks…that’s funny.