The CCPD is honored to add two new officers, Juana Diaz and Mike Charlton to our Department. This week,  they graduated from the HRCJ Training Academy. Hampton Roads Criminal Justice Training Academy provides the highest achievable level of professional criminal justice training and other related services in our area. 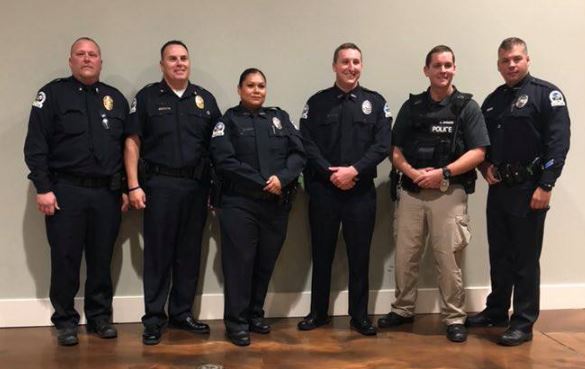 The scholarship awardees included a Certified Nursing Assistant who is taking classes to become a nurse, as well as nurses who wish to advance their career and professional development by completing their BSN (Bachelors of Science in Nursing) – a four-year degree that includes clinical rotations to apply classroom skills in the real world.

The Riverside Shore Memorial Hospital Auxiliary has supported heath care on the Eastern Shore of Virginia for nearly 100 years.  Their tireless fundraising began with, and was instrumental in, the construction of the first hospital in the 1920s.  They have also supported the construction of the 1971 hospital and 2003 cancer center in Nassawadox as well as the most recent Shore Health Services campus in Onancock.  The Auxiliary’s efforts have funded new equipment, renovations and comfort items for patients and their visitors.  Perhaps their most impressive investment has been their support of continuing education for the hospital’s nurses.

John Peterman, Vice President and Administrator at Riverside Shore Memorial Hospital, was impressed by the Auxiliary’s foresight.  “This is a long-term investment which will pay dividends for years to come.  Our nursing team is critical to our patients’ recovery and to their experience.  As our nurses grow in their profession, there is a ripple effect throughout our organization as a whole.”

Ann Williams, President of the Auxiliary, said, “The Auxiliary enjoys the support of the entire community, and by helping these nurses to learn more and offer more to their patients, we are able to give back to the entire community.  It is a special thrill for us to be able to help them further their career goals and develop into future leaders.”

This is special to the Mirror by Khyber Little.

Unfortunately for the dolphins, in the early 1960s, tuna fishers began switching their fishing method from pole, hook, and line to much more efficient large nets that enabled fishers to catch many tons of tuna at one time. Speed boats chase down the dolphins, herd them together, and encircle the net around them. During this process, tuna stay with the dolphins and the two are captured together. These are called purse seine nets because the net is closed—like closing a purse—on the dolphins and tuna. From the mid-1960s to the mid-1970s, tens to hundreds of thousands of dolphins drowned each year when caught in the nets. Subsequently, their carcasses were thrown into the ocean as wasted bycatch. When this practice was brought to public attention in the early 1970s, purse seine nets were modified so that most dolphins were able to escape before the nets were pulled onboard the fishing vessel. A portion of the net is lowered underwater allowing the dolphins to escape. This modification greatly reduced the dolphin bycatch, especially in the eastern tropical Pacific where today more than 99% of captured dolphins are released alive.

“Check the label on a can of tuna fish. Look for evidence that the can contains “dolphin-safe tuna.” However, according to a 2013 National Resources Defense Council (NRDC) published report, much of the tuna sold in the U.S. is being falsely labeled as “dolphin-safe.”

Tuna from fisheries in the Indian Ocean, Sri Lanka, India, and the Philippines are especially suspect because of lack of enforcement of regulations, while tuna caught in U.S. waters and the eastern tropical Pacific can be expected to have been caught by means that reduce dolphin mortality. Bycatch may play a role when marine species become threatened or endangered. Species determined to be in imminent danger of extinction throughout a significant portion of their range are listed as endangered. Species are considered threatened if they are likely to become endangered in the foreseeable future. For example, all seven known species of sea turtles worldwide are either endangered or threatened. Many human activities threaten sea turtle populations including bycatch in commercial fishing nets, especially shrimp nets. Other threatening activities are commercial harvesting of adult sea turtles (e.g., for food), poaching of eggs, disturbance of nests, collision with ships, and ingestion of plastic litter.”

NOAA Press Release–The annual meeting of the International Commission for the Conservation of Atlantic Tunas (ICCAT), held in Dubrovnik, Croatia, concluded this week. U.S. goals for the ICCAT meeting were focused primarily on adoption of critical conservation measures while maintaining U.S. recreational and commercial fishermen’s access to ICCAT-managed fisheries. While the United States commends ICCAT’s progress at this meeting on efforts to combat illegal, unregulated, and unreported (IUU) fishing, the Commission’s lack of progress on key conservation measures is disappointing.

Earlier this year, a stock assessment confirmed that Atlantic bigeye tuna is overfished and subject to overfishing.  The United States advocated strongly for the adoption of measures that would end overfishing immediately, rebuild the stock within 10 years, establish greater accountability to catch limits, and take appropriate account of the relative impact of various fisheries by reducing the catch of small bigeye tuna in purse seine fisheries. The United States is disappointed that ICCAT failed to adopt measures that will ensure the long-term sustainability of the bigeye tuna stock. The current management measures in place for tropical tunas, including bigeye tuna, were extended for 1 year.

END_OF_DOCUMENT_TOKEN_TO_BE_REPLACED

EXMORE- The Town of Exmore’s Public Works Department has a new ride for transiting to maintenance jobs and for responding to emergency repair calls.  On Monday, November 19, Mr. Jason Osterbind (left) and Ms. Peggy Jordan (center) of the U.S. Department of Agriculture (USDA) handed the keys to a new 2019 Ford F-550 work truck to Exmore’s Utilities Director and Zoning Administrator, Mr. Taylor Dukes (right),  The heavy duty vehicle was  purchased through a grant/loan program from the USDA’s Rural Development Program.

Exmore’s Public Works Department has a new vehicle for transiting to maintenance jobs and for responding to emergency repair calls. (Photo Town of Exmore)

Science and Philosophy Seminar of the Eastern Shore of Virginia has scheduled its next seminar, “A Combat Engineer’s Experiences During World War II.” The free 90-minute seminar will be at 12:30 p.m. on Friday, November 30 in the Lecture Hall of the Eastern Shore Community College, 29300 Lankford Hwy, Melfa, VA 23410.

Drawing from letters to home and official histories, Tripp Ransone will describe his father’s experiences as a Platoon Leader in the 998th Treadway Bridge Company; Lieutenant Dupuy Ransone fought from Normandy into the heartland of Germany.

Special Opinion to the Mirror by Paul Plante

Recently, you were widely quoted in the media your capacity as Chief Justice of the United States saying as follows, to wit:

“We do not have Obama judges or Trump judges, Bush judges or Clinton judges.”

“What we have is an extraordinary group of dedicated judges doing their level best to do equal right to those appearing before them.”

As a loyal American citizen who is older than you, and who has sufficient experience with the federal court system as a civil rights litigant to have formed an informed opinion about it, and who in fact has been harmed, and intentionally so, by the federal court system you have chosen to defend in your recent op-ed, I would like to take this opportunity in this op-ed to challenge both of those statements, to show that they are not true, and are in fact, quite false.

First of all, Justice Roberts, yes, we do have Bush judges and Obama judges, as we can clearly see from an Associated Press article entitled “Obama pick for bench blocked by GOP for first time” by Larry Margarsak on May 19, 2011, as follows:

NORFOLK — The largest airport for Virginia’s Hampton Roads region says it will offer its first-ever direct commercial flight to the West Coast.

Southwest Airlines will offer seasonal flights next summer from Norfolk International Airport to San Diego. The flights will be available on weekends and scheduled to begin June 9 and run until Aug. 5.

VIRGINA BEACH AND NEWPORT NEWS, Va. (November 19, 2018)—Demonstrating a joint commitment to ensuring our communities have as many choices as possible for their health care, Optima Health and Riverside Health System have agreed to include Riverside facilities and providers in the Optima Health insurance plan network.

Effective November 15, 2018, all Riverside hospitals, facilities, physician practices and providers are considered in-network for Optima Health members. With this agreement, Riverside joins Sentara, Bon Secours, Chesapeake Regional, and CHKD to offer Optima Health members total coverage of any hospital in Greater Hampton Roads, including on the Eastern Shore, Peninsula and Isle of Wight.

“We believe this will provide improved access for businesses and employees to the outstanding Riverside network of providers, hospitals and Lifelong Health Services (rehabilitation, home health and hospice).  It will also help keep insurance premium costs down in the longer term,” according to Dr. Mike Dacey, Chief Clinical Operations Officer.

The defendants were charged with a range of crimes, including voter fraud, registering a fictitious person, and circulating a petition with fake names.

Note: Democrats picked up 6 Republican seats in CA despite after not winning a single seat in Primary turnouts – not even close. In seat after seat they trailed on ED only to “surge late” with “found votes” disproportionately in their favor. In Wisconsin, the Gubernatorial & AG race was won at the midnight hour, both by roughly 30-some thousand votes, miraculously found in Milwaukee County (aka – Blue stronghold). No other races had jumps by that amount.

At the Florida Broward County jail, a Deputy reported that there was “corruption going on inside the jail and that he had never seen anything like it.”